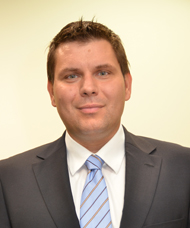 Vanja is presently seconded fulltime to GGE ltd to develop several projects in the energy sector with partners.

Prior to joining the team, Vanja worked as a Senior Manager in PricewaterhouseCoopers from 2000 to 2006 and was engaged on numerous transactions in the region, in the financial services, FMCG, and telecommunications industries which provided him with significant experience and industry knowledge. Vanja was one of the founding members of the PwC SEE Advisory Group which was in charge for the region comprising of the former Yugoslavia, Bulgaria and Albania and provided advisory, transaction and M&A support to various PwC`s clients.

Vanja was also a resident in London as a member of PwC London team engaged by the UK Government to perform a restructuring of the UK National Health System.

In 2006 Vanja joined MK Group, one of the largest private groups in Serbia, as Head of Investments. He was in charge of evaluating various investments, both in companies and in real estate, privatizations, restructuring and all of MK Group`s major commercial transactions, both in Serbia and in Ukraine.
Back